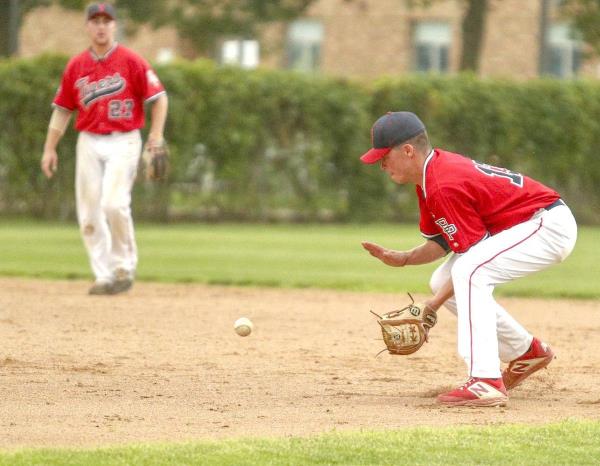 By Brett Kruschke and Matt Ruehling

Since the evening of June 22, the only team Belle Plaine has lost to is Jordan. First came a 9-2 setback at the Mini Met on June 25, then a 3-2, late-inning home loss against the Brewers on Sunday. Otherwise, the Tigers have won six games – including a shutout victory at St. Peter last Wednesday and a shortened blowout win at Le Sueur on Friday.

Our ballers shouldn’t feel too bad as, per usual, Jordan has run roughshod over the rest of its Class C league competition and at 11-1, has already clinched the No. 1 seed in the Region 6C tournament. The Tigers are the first of the RVL Class C teams to have completed their league schedule and at 10-4 (16-7 overall), will be either the RVL’s No. 2 or 3 seed entering the Region tournament. At 7-4, Gaylord is Tigertown’s nearest threat to claim the No. 2 seed, and the Islanders hold the tiebreaker against Belle Plaine.

On Wednesday, July 17, the locals will wander over to Waconia for a 7:30 p.m. affair. The Lakers, a very talented team this year and in recent seasons, was recently and shockingly ruled ineligible for the playoffs due to an illegal player. Their ballpark has come a long way and is part of a top-notch operation, one well worth the trip over from Tigertown.

Tuesday, July 23 marks the end of the regular season for the Tigers when Dassel-Cokato pays a visit to Tiger Park at 7:30 p.m. It’s Fan Appreciation Night, with hordes of giveaways throughout the game. Don’t miss it!

After rain postponed the game from July 9 to July 10, the Tigers scrambled to find 10 players to make the journey to St. Peter on Wednesday night. The Tigers sent Nathan Herman to the hill, while the Saints countered with 2018 Tiger draftee Andy Regner.

The two young horses for each team were locked in a pitcher’s duel all night. Each chucker worked out of early trouble, but the Tigers were able to get on the scoreboard first in the fourth inning. Chase Emmers lead off the frame with a single and stole second base before advancing to third on a single by Mgr. Matt “Break glass in case of emergency” Ruehling. Emmers scored on a groundout, giving the Tigers a 1-0 lead.

In the fifth inning, Herman put the glove down and found a piece of lumber, clobbering an RBI double to give the Tigers a 2-0 lead.

Offensively, Mgr. Ruehling and Brody Curtiss led the way for the “Fearless Ten” with two hits apiece. Herman was the MVP, going the distance on the mound and scattering six singles, with four strikeouts and just a pair of walks.

Another lean Tiger squad limped to Le Sueur for a Friday night showdown on July 12. Unlike Wednesday’s offensive struggle at St. Peter, however, the Tiger Lumber Company exploded for 16 runs and 18 hits in just seven innings of at-bats.

The Tigers scored in bunches, with five runs in the first and fifth innings, and four runs in the sixth. Tyler O’Brien paced the Tiger attack with a Kirby Puckett-like four hits. Under-utilized savvy veteran Zac “Papa” Dahlke, typically epoxied to the bench, joined in on the offensive explosion with three hits – one of which was a stand-up double! (No, that is not a typo).

Curtiss contributed three hits. Jared Miller, Pat Schultz, and Ruehling all chipped a pair of knocks. Curtiss also took the mound and did his best to keep the ball away from the misplaced defense, striking out eight Braves over six innings of work.

Sunday was deemed the “Day of Baseball” at Tiger Park, with four games scheduled between varying age levels of Jordan and Belle Plaine teams. BP’s Junior Legion squad started out on the right foot, securing a 7-1 win. Jordan’s Legion team shot back with a vengeance, evening the score with an 11-0 blanking. The Gray Tigers, meanwhile, rode former town-baller Shane Hofmann on the hill to a 6-2 defeat of the Alers.

In the grand finale, Tiger starting pitcher Jake Mercado scuffled out of the gate, yielding a run but leaving the bases loaded in the top of the first inning. He worked three additional frames and settled in nicely thereafter, finishing with a lone run allowed.

The Tiger bats began the third inning with two quick outs before nine-hitter Jared Miller induced a walk, followed by a Tyler O’Brien single. Josh Terrio tied the game with a clutch base hit before Curtiss doubled, giving El Tigre a 2-1 lead.

Clayton Meyer relieved Mercado on the hill and was very sharp, setting the first nine Brewers down in order. The fateful eighth inning started with a single, but a failed hit-and-run resulted in the base runner being erased after a rundown. With two outs and nobody on base, Joe Lucas’s single was followed by a well-hit ball ruled an error. With the game hanging in the balance, Brewer pitcher Nate Beckman drilled a back-breaking, two-run double over center fielder O’Brien’s head.

Thanks to Beckman’s key rip, he eventually became the winning pitcher as former minor leaguer Joe “The Antelope” Lucas worked a worry-free two-inning save.

All three of Belle Plaine’s hits on the day came consecutively in the third inning, belonging to O’Brien, Terrio and Curtiss. Derek Dahlke took the mound this season for the first time with the Tigers, tossing a scoreless ninth.

# = non-league game and/or doesn’t count towards